You are here: Home / US Visa Types: A Guide / I-94 Admission Record

This article on the I-94 admission record relates to our guide on US visa types. Please review it if you would like more information on US visas. 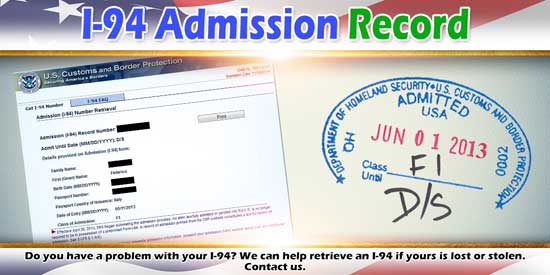 How To Get an I-94/Deferred Inspection

Using the CBP website, the process of obtaining the I-94 admission record is straightforward. Sometimes when attempting to retrieve the I-94 the traveler will find no information. Even though the traveler has a stamp in the passport, he or she cannot retrieve the electronic record using the correct information. When this happens, the traveler must return to CBP to resolve the problem. You cannot return to the airport or port of entry that you arrived at and go see the CBP officer that interviewed you. Instead, CBP provides deferred inspection sites. You must go to one of these deferred inspection sites and show the CBP officer the evidence of your admission. You ask that officer to fix the problem with your inability to get the electronic I-94 admission record.

If the visitor to the United States was going to stay for the period CBP authorized and return home, it is not that important to have a copy of the I-94 or fix any problems at the CBP deferred inspection site. But, what if the visitor or travel seeks an extension of stay, wants to change status, or becomes eligible for some of the immigration benefit. In all these cases, the traveler must show lawful admission to the United States. If the visitor lost the I-94, USCIS will not approve any benefits.

If an I-94 is lost or otherwise unavailable, you can petition CBP to search its records to provide a duplicate copy. An example might be helpful. If someone came to the United States and CBP admitted them, but they overstayed and then lost the I-94 or passport it would be impossible to get the I-94. But, if that person later married a US citizen, and the US citizen wished to file for lawful permanent residency, a green card for the spouse, the spouse would have to show lawful admission to be successful. In cases like this, we file FOIA requests with CBP to seek evidence of the record of admission. CBP responds with evidence of the person’s lawful admission to the United States. We then use the information about the entry to pull an electronic I-94 of the CBP website. The traveler has then recovered evidence of his or her lawful admission and can now file for the immigration benefit.

If you have any issues with your I-94 admission record, particularly if you’ve lost it and need it for an immigration benefit, please contact us. We can help you retrieve the lost I-94 or otherwise resolve problems associated with it.