You are here: Home / Immigration Waivers / Denied Entry to the USA – United States of America 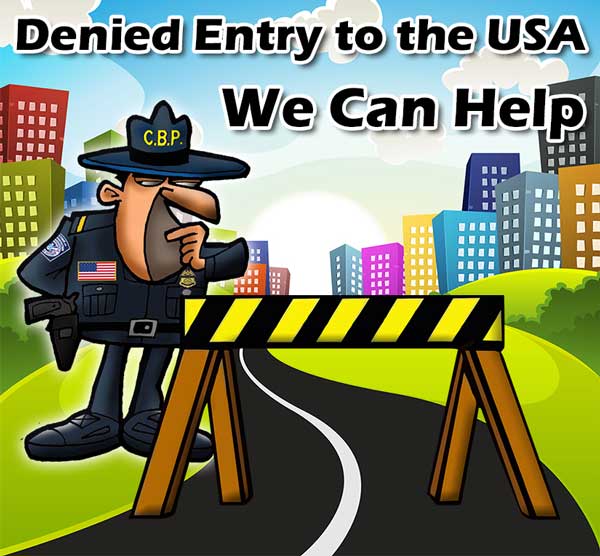 Before discussing this waiver for inadmissibility further, we go over why someone would need the waiver, why they are inadmissible, in the first place. The vast majority of inadmissible Canadians who cannot travel to the United States are inadmissible because of a criminal conviction. Examples of crimes that tend to cause the biggest problems are offenses related to drugs, and offenses that are considered crimes of moral turpitude. Examples of this latter category are theft offenses. Besides criminal convictions, a common reason that Canadians are refused entry to the USA is violations of US immigration law. Examples of this are misrepresentations to Customs and Border Patrol (CBP) officers at the border while seeking entry to the United States. It is possible to combine both the criminal conviction and the misrepresentation together. If a CBP officer asks have you been convicted of any crimes, and you are aware of a conviction for a shoplifting offense 15 years ago, but denied that you have ever been convicted of any crimes, it is likely that the CBP officer will find the criminal conviction for shoplifting in the Canadian criminal database to which he or she has access. Such a discovery by the CBP officer will likely result in the Canadian being refused entry on two grounds, the criminal conviction itself, and making a misrepresentation about it.

Application for a Nonimmigrant Waiver of Inadmissibility

Canadians who have this inadmissibility problem can request a nonimmigrant waiver of inadmissibility on form I-192, application for advance permission to enter as a nonimmigrant. As you might expect, there’s a lot more to a waiver application than simply completing a form. You will need to get a certified record of conviction from the Royal Canadian Mounted Police. You will also need to prove that you’re a Canadian citizen or a landed immigrant. The documentary requirements of the visa application itself are quite simple. Where it gets more difficult is in arguing your case under the appropriate legal standard for admission, grant of the waiver. While all waiver applications are submitted to CBP at either Ports of Entry (POE) or preclearance ports like those at major Canadian airports, Calgary and Toronto, the CBP office simply acts as a processing center to fingerprint the applicant and collect the appropriate fee. Once the CBP officer accepts the application it is sent to the Admissibility Review Office (ARO) for adjudication. A single office adjudicates all these nonimmigrant waiver requests so that they can be adjudicated to a uniform standard.

All applications for a nonimmigrant waiver to the United States are evaluated against a standard set forth by the Board of Immigration Appeals in 1978 in a case called Matter of Hranka. This case instructs that the ARO must evaluate an application by considering first, the risk of harm to society in the United States if the applicant was admitted. The second factor is the seriousness of the violation. Lastly, the applicant must have reasons for entering the United States. It is making a compelling case in this required legal argument that needs to accompany all waiver applications that can prove difficult, and where the services of an experienced waiver attorney can be invaluable.